The name Saph1re came about many years ago when I was setting up an eBay account, but every username I tried was taken. I happened to look down at my sapphire engagement ring and decided to spell it wrong, and guess what, it was available :-)

Although I've been rating books on Goodreads for years, I have only been actively reviewing books for authors and publishers since 2014, but loving every minute of it.

When I'm not working or reading, I love gardening, coastal and country walks, cooking and watching TV and films.

For my second post I have details of Defaced, my review, and a sexy excerpt to tempt you.

I recently read Defaced and thoroughly enjoyed it. It is part one of a trilogy, and I can't wait to read part two. 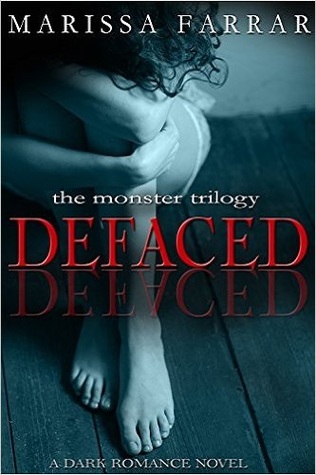 Hidden away from society by his criminal father, there lives a man who has never entered the outside world. Now, having taken over his father's business, he has all the money and power he could dream of, yet still he refuses to let himself be viewed by the rest of society.

Traumatised by an event in her past, Lily Drayton has a phobia of being touched. Though she helps people externally with her skills as a laser therapist, she refuses to let anyone in, emotionally or physically. When Lily is kidnapped on the way home from work one evening, she discovers she's not the only person who keeps themselves cut off from the rest of the world.

A man owns her now--a man both dangerous and enigmatic. Drawn by his dual beauty and hidden pain, he awakens something inside her, something she believed was long dead. Brought to a room without windows, she's given an impossible task: to make her owner acceptable to the outside world.

Can altering his face change who he is as a man, or is he truly a monster, both inside and out?

In short, it is about a woman who is kidnapped by a man, and the way the dynamics of their relationship changes over time. This story definitely has a feel of Beauty and the Beast, which I love.

I liked the two main, somewhat damaged characters in this book. Lily and Monster's characters develop well throughout the whole story, leaving the reader asking questions almost to the very end. I loved the way we gradually get to know the characters more and more as the story progressed. My view of the characters at the beginning, to my opinion of them by the end, completely changed.

I would like to thank the author for a copy of this book, via THE Book Club (TBC) on Facebook, in exchange for an honest review, and wish her great success with this book.

Sexy excerpt from Defaced, which Marissa has kindly allowed me to share on my blog today, so please have a read and enjoy:

Where to find this book: